How will the Cardinals’ training camp battle shape their defense? Part of assembling a playoff contender is finding an identity and building around it. The Baltimore Ravens have Lamar Jackson and the offensive possibilities that come with him. The Philadelphia Eagles have the game’s most versatile rushing attack. The New York Jets have committed to the bit of being bad at football.

The Arizona Cardinals may just pretend to be championship-caliber, but they have found their identity, at least on defense. They are an uber-athletic team with hybrid players all over the field. Versatility is their game and with players like Isaiah Simmons, Zaven Collins, Budda Baker, and Zach Allen, it’s easy to see why that’s the case.

As Week 1 approaches, Arizona still has an important training camp battle ongoing at the second edge rusher spot. Markus Golden will take on one side and do his best to mitigate the loss of Chandler Jones. The remaining outside linebacker position is an opportunity for the Cardinals to double down on the versatility they’ve harnessed across the defense.

Who will start at outside linebacker for the Cardinals?

Starting with the hybrid types, Arizona has a veteran option as well as a rookie it can pivot to. Devon Kennard offers a flexible skill set as an edge rusher/off-ball linebacker hybrid. He fits well within Vance Joseph’s 3-4 defense. He didn’t add much to the pass rush last year, as he failed to generate a single sack. Still, he saw more time at linebacker than edge rusher and was a rotational piece in 2021.

He may be used in a similar role again, seeing the field on the occasions where they play their base defense on passing downs.

The other side of that platoon could be Cameron Thomas, a third-round rookie from San Diego State. Thomas offers versatility in the form of an interior defensive lineman and an edge rusher. He was one of the most productive pass rushers in all of college football in 2021. Perhaps they use him in a “big base” package to get an extra big body on the field for early downs.

A couple other young guns could see the field, too. The Cardinals took Myjai Sanders with the 100th pick in the 2022 NFL draft, 13 selections after Thomas. Sanders is a smaller edge rusher who is more of a prototypical rotation piece. He’s athletic, but problems against the run can keep him off the field.

Furthermore, Victor Dimukeje and Dennis Gardeck will also be competing for this role. The former is a technical rusher expected to take a step forward in 2022. The latter is a recently-extended special teamer who could see an increased role.

Ultimately, the Cardinals will likely choose to mix and match between their edge rushers, rotating between bigger bodies, speed rushers, and guys with coverage upside. Personally, the experience of Kennard and productive background of Thomas make them the ideal combo to start the season.

Regardless, you shouldn’t be betting on either Thomas (+6500) or Sanders (+8000) to win Defensive Rookie of the Year (DraftKings). If you want a stud edge rusher with better odds, consider Boye Mafe (+5000) or a safer option like Aidan Hutchinson (+500).

Did you like it?
87 votes
Tell your friends
Top Sportsbooks Arizona Cardinals tight end Zach Ertz is dealing with a calf injury, hurting the team in the short term. Can it open up long term possibilities for... 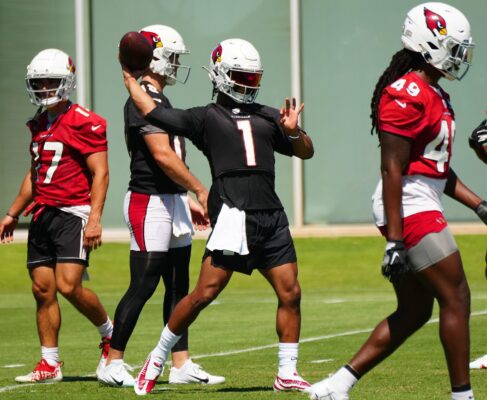