The 49ers stable of running backs is very unstable We must not forget about tradition. The circus-like festivities of Trey Lance’s sophomore season have engulfed the San Francisco 49ers. From armchair quarterback coaches blasting every throw in practice, to a bevy of MVP voters and a few tears for Jimmy Garoppolo, it’s impossible not to turn into the bay.

Lost in all of this is a significantly less important, though potentially more intriguing, question.

Who will lead the 49ers in rushing this year?

Head coach Kyle Shanahan has called the shots in San Francisco for five seasons. He has as many different leading rushers.

Injuries, roster turnover, and surging hot streaks have all contributed to the merry-go-round of running backs Shanahan has used. All have seen the benefits of a wide zone scheme that’s taken over the league, and all but Mitchell have seen their reign as king of the Calif. hills end early. How long will he sit atop his throne?

How will San Francisco divide its rushes?

Breaking down the 49ers’ running backs starts with realizing the touches won’t all be theirs. Lance will take significant carries, Deebo Samuel may have signed his wide receiver rights away, and Kyle Juszczyk will get an occasional chance to shine.

Mitchell will also have to share touches with the aforementioned Wilson, as well as Trey Sermon, Tyrion Davis-Price, and any other back that makes the roster, such as JaMycal Hasty.

It seems Mitchell has looked to improve his third-down viability to keep himself on the field in passing situations. Despite 963 yards and five scores on the ground, Mitchell only saw 19 receptions in 2021. Hasty and Juszczyk saw more work there, and Wilson would have too if not for injury.

Furthermore, others will be poaching his carries. Sermon is simply not a scheme fit, an obstacle in his path to relevancy, but is tough enough to remain an option in the red zone. Wilson has had Shanahan’s heart before and saw decent workloads, particularly when Mitchell was hurt. Hasty’s burst is unique, which may keep him around.

When everyone is healthy, San Francisco will likely feature the hot hand, though Mitchell seems to take precedence.

Betting on the 49ers running backs means dipping your toes into certain uncertainty. DraftKings is offering +100 odds on the under for Mitchell’s rushing yards total of 900.5 yards, meaning a win can double your money. With a history of being unfaithful to their backs and a host of options ready to take away touches, fading Mitchell’s volume feels safe. If Jimmie Ward isn't ready to man the back end of San Francisco's defense for Week 1, should you reconsider betting on them? 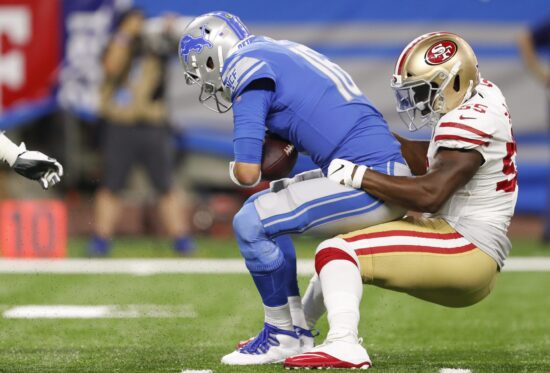 NFL
Jimmy Garoppolo Could Be Released