What should we expect from Matthew Stafford and his elbow? The Los Angeles Rams swung for the fences and hit a home run. Going all in on a star quarterback won them a Super Bowl, and now it’s their time to become a dynasty or die trying.

The Rams hoisted a Lombardi Trophy because of Matthew Stafford’s golden arm. That same arm has continued asking the most important questions Los Angeles will have to answer in 2022.

Following an offseason inflammatory injection, Stafford did not throw during voluntary OTAs. He racked up 4,886 yards and 41 touchdowns while finding himself in the top 10 in EPA/Play and Success Rate in 2021. Still dealing with elbow tendinitis, will he be able to replicate that level of success?

What should the Rams expect from Matt Stafford?

So far, all signs from Rams camp are good. Stafford, having dealt with the injury last year, made sure to keep reporters and fans at bay. He called it “irritating” but hushed concerns during and after practices. He looks good, regardless of his comfort level.

We know how far Los Angeles went with Stafford’s less-than-ideal elbow, so who’s to say we should be concerned?

It’s hard to argue with that logic. In fact, I don’t think Stafford’s injury negatively affects the Rams’ win total (10.5 on DraftKings) at all. Their +105 odds on the over are actually really good.

Again, the case for Stafford falling off in any legitimate regard is largely speculation and not empirical. If this tendinitis develops into a much larger issue, sure, we can have that conversation, but neither Stafford or the Rams have planned for such an occasion.

What head coach Sean McVay may do, however, is add an extra layer of caution to the game plan. They’ll avoid extra, unnecessary passes. This could manifest itself in lower neutral pass rates and early-down pass rates, both of which Los Angeles held high marks in last year (especially down the stretch).

DraftKings has set Stafford’s passing yardage total at 4500.5, with -115 odds on the under. There’s a pretty comfortable window for Stafford to remain effective while still falling below that mark. Additionally, Stafford’s mark of 17 interceptions is unlikely to be repeated. Taking a stab at under 13.5 picks (-110) should also provide good value.

Essentially, we shouldn’t worry about Stafford until Los Angeles gives us a reason to, and a decrease in volume isn’t necessarily that sign. Buy the Rams, sell the Stafford props, and hope his arm is healthy enough to make everyone happy. Kyren Williams was officially activated by the Los Angeles Rams on Monday, firmly entering him into the competition for touches. Can he make enough... 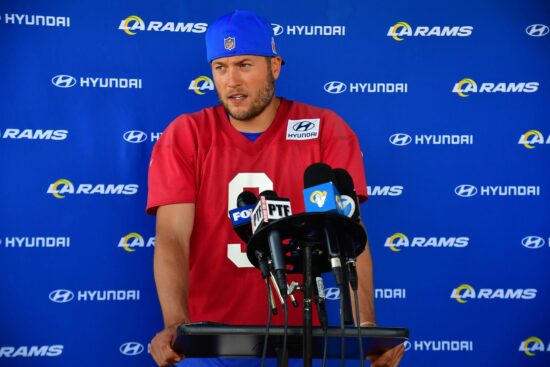