As the Ryan Poles regime enters town, one task remains paramount: develop Justin Fields into the franchise quarterback of the Chicago Bears. Yet, a full rebuild has left Chicago with one legitimate wide receiver and a shaky offensive line. The Windy City has turned into one of the worst environments for a quarterback to grow in.

To Poles’ credit, he’s accumulated lottery tickets in the form of inexpensive wide receivers. Just because they weren’t able to bring in a headliner to complement Darnell Mooney doesn’t mean the offseason was an abject failure. At least they have tight end Cole Kmet, right?

If you buy enough scratch offs, you’re bound to win one. Will it be the jackpot? Probably not, but it is still possible to turn a profit. However, every scratch off that falls out of your pocket as you leave the story is a wasted opportunity. With Harry’s ankle surgery holding him out eight weeks, a chance to support their quarterback has once again evaded Chicago.

Chicago’s group of wide receivers is arguably the worst in football, and the high-ankle sprain Harry suffered only limits its potential.

Harry, who was traded from the New England Patriots for a 2024 seventh-round pick, has one last attribute to his name: potential. A former first-round pick, Harry was a highly-competitive target for the Arizona State Sun Devils. He was highly touted for his ability to fight through contact at the catch point and make plays with the ball in his hands.

However, New England clearly was not the ideal landing spot. Notorious for both missing on early wide receiver selections and being unforgiving in its decision making processes, the Patriots struggled to acclimate Harry into their offense. Across three seasons, Harry saw only 57 catches, 598 yards, and four touchdowns.

If Chicago, now armed with former Green Bay Packers coach Luke Getsy as offensive coordinator, could unlock some of that potential, Fields would have a third legitimate option to target. Getsy was part of a staff that routinely got the most out of targets others wouldn’t deem worthy. Of course, having Aaron Rodgers helps.

Right now, the Bears roster looks unfinished, like a hibernation that was cut short. Unprepared to face the daunting defenses circled on the calendar, it’s hard not to feel like it’s a sinking ship.

Harry may not have blossomed into much of anything in the eight weeks he’s set to miss, but his absence is symbolic of how desperate Chicago is to find a worthy pass catcher. The fact that Harry is the key training camp injury is enough to fade the Bears.

Take FanDuel’s +125 odds on under 5.5 wins. You might as well take the -112 odds that Fields falls under 18.5 passing touchdowns, too. Chicago is a mess right now, and after Harry’s injury, they’re a mess with even less upside. Creating a welcoming environment is critical in developing a young passer and so far Chicago hasn't stepped up to the task. Is it too late to save ... The Chicago Bears really, really need wide receiver help. With N'Keal Harry hurt, how confident should we be in their aerial attack? After an attempt to extend star Roquan Smith, the Chicago Bears are on the verge of losing the linebacker. Is there still time to bet the under on ... 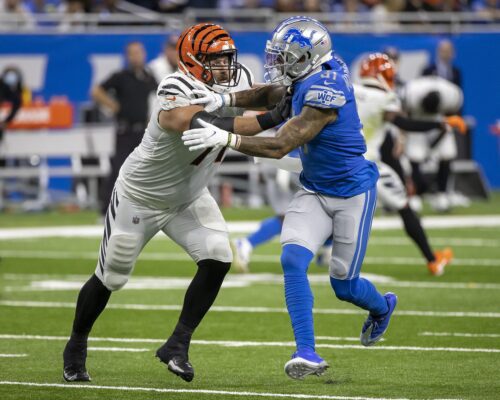