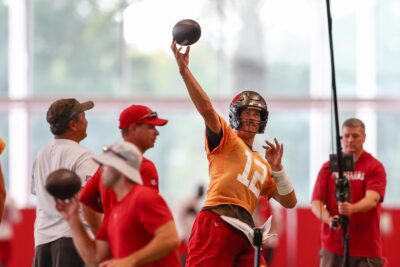 Is There Any Question About How Much Tom Brady Loves Football?

We know about the snub – drafted in the sixth round, No. 199! We know he allegedly fell asleep (meditation, anyone?) in the locker room before playing in his first Super Bowl, and the amazingly successful partnership with Patriots coach Bill Belichick, and the move to Tampa and another Super Bowl triumph with the Buccaneers.

We know about the fiery competitiveness and the mouth of a sailor, and the standard to which he holds himself, his teammates, his coaches and even game officials. Heck, we even known about the three dogs, Lua, Scooby, and Fluffy.

Perhaps what has been forgotten after all the records and awards and Super Bowl wins is this: Thomas Edward Patrick Brady loves football.

“I think it’s a real love for what I’m doing,” Brady said. “This isn’t a job. It’s really a true love and I fell in love with what I’m doing a long time ago.”

And hits OVER of the time